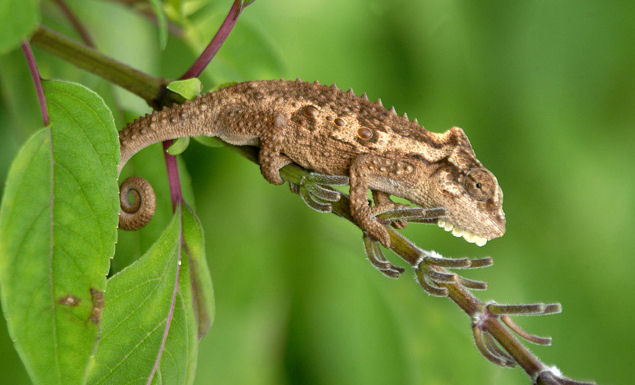 KwaZulu-Natal is the most chameleon-rich province in South Africa, possessing six of the 17 currently described dwarf chameleons. Dargle is home to the Natal Midlands dwarf chameleon (Bradypodion thamnobates).

The genus Bradypodium means ‘slow foot’ and describes the deliberate, jerky gait of the animal. Adults are between 10 and 18cm in length, have a spikey ridge along their back, a ‘beard’ of scaly lobes and bodies covered in knobbly warts. Colouration is distinctive – breeding males are usually green/turquoise and black with a yellow stripe and females are a mottled green, grey and brown. They change colour to aid camouflage and are often hard to find.

Dwarf chameleons give birth to live young as opposed to common chameleons which lay eggs.

Midlands Dwarf Chameleons live in mist-belt forest, usually on the lower branches. During winter they become brown and hibernate in long grass. Due to habitat loss, they are now often found in gardens and along roadsides. The international pet trade is a major threat to dwarf chameleons. By conserving forests and woodlands, and protecting the grasslands that they need to survive in nature, we contribute to the health of entire ecosystems.

There are 14 documented species of dwarf chameleon in South Africa with a number of newly discovered ones, yet to be recognised. The species thamnobates is endemic to KZN Midlands and occurs in a range from Boston though Dargle/Lidgetton/Nottingham Road to Mooi River.